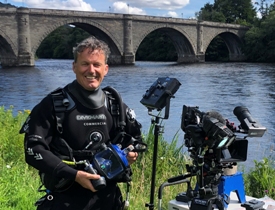 Gary Bankhead is an amateur underwater archaeologist, small finds researcher and illustrator. He is married to his wife Angela and together, they share a family home in Pity Me, County Durham. He has been a sub-aqua diver for over 29 years and is a qualified BSAC Dive Leader having dived extensively around UK inshore waters and the Egyptian Red Sea and a qualified level 3 water rescue technician. Gary is also an accomplished public speaker, having given over 150 talks, papers and lectures. His other interests include long distance walking, mountain climbing (in 2007, he successfully summitted Cerro Aconcagua (6,960m), in Argentina), running (completing over 20 full and half marathons), snow boarding, snorkelling and spending time with his four children and six grand children. In 2004, he helped establish the Fire and Ice Expeditions team which has gone on to raise over £100,000 for local charities.

As an Honorary Research Associate in the Department of Archaeology, Durham University, Gary's current role is to coordinate the wider research of the Durham River Wear Assemblage. As well as his own ongoing small finds research, he continues to work with Durham University students undertaking both the MA in Museum and Artefact Studies and the MA in Conservation of Archaeological and Museum Objects courses to analyse and research the River Wear artefacts (see: student case studies), along with specialists with traditional archaeological skills from finds drawing to comparative analysis and developing typologies.

Gary is also an external specialist for the Museum of London Archaeology (MOLA) having recently undertaken research on two significant assemblages of sixteenth/seventeenth century lead cloth seals found during MOLA excavations at the Crossrail Project (Liverpool Street) and at Tanner Street, Bermondsey.