Students in the Department of Archaeology undertaking the MA in Conservation of Archaeological and Museum Objects course have been researching objects from the Durham River Wear Assemblage. Here are some extracts from their research... 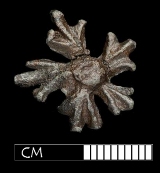 The head of the mount has five decorative leaves radiating from a central flattened dome. Each leaf consists of three lobes, each lobe having a central longitudinal ridge. The rivet on the back of the mount ends in a tapered point and is bent near the base at approximately a right-angle to the head of the rivet and curves parallel with the head towards the point. Mounts are small metal objects and are often decorative, rather than functional. They can be made from one of many metals: lead, tin and pewter, copper alloys and iron or silver and gold. Lead was originally a by-product of silver mining and so, was cheap to buy. Due to its low melting point it was easily manipulated and cast. However, the softness and weight of lead meant it was impractical for use in large or functional objects and so, was most often used for small decorative objects. 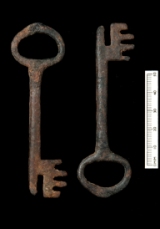 Solid, sub-circular section shank, with a slight widening at shoulder. Shank does not extend beyond bit and tapers slightly at end. Slight bulge in the middle of the shank. Two pairs of shallow incised collars in shank, starting on one side and extending over the top. One pair continues a little way down the other side, but other pair does not. All clefts rectangular. One cleft parallel to shaft from bit end, extending just over halfway into the bit. Three cleft perpendiculr to it, extending to around halfway into the bit. The two middle wards extend slightly beyond the outer wards. The ward at the bow end of the bit is bent towards the bow slightly. Possible wear at end of shaft. All wards worn and rounded, with sloping edges. Ward at bow end has a chip or groove worn into it. The key fits well within Ward-Perkins' classification of 1975, as a Group IV key. 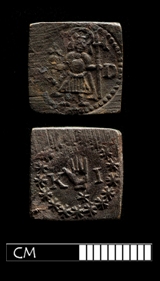 Made in Antwerp. Late sixteenth century, probably between 1576 and 1579 (Withers: 1995: 61). Length: 14.5mm. Width: 15mm. Thickness: 2.1mm. Weight: 3.45g. Brass. Elemental analysis through an EDXRF machine reveals that it is made of brass, an alloy of copper and zinc. Traces of iron, manganese, lead and strontium are also present. Decoration: St. Ladislas holding a halberd in his left hand and an orb in his right. The orb, also known as a globus cruciger, is a globe surmounted by a cross, symbolising Christ's (the cross) dominion over the world (the orb). Orbs have been used as symbols of monarchical power and justice on coins, coin weights, iconography and royal regalia from the Middle Ages to the present day. Ladislas is in armour and wears a crown. Two billhooks frame his head. The letters H (very faint) and D on either side of St. Ladislas stand for 'Hungarian ducat' (Withers: 1995: 24). A ring of beads encircles the whole design. Reverse: Incorporated within a circle of stars is the hand of Antwerp. Underneath the hands stands a single six pointed star. This indicates that the maker was appointed by the sovereign (Withers: 1995: 10). The letters K and I on either side of the hand are the initials of the unknown user of the coin weight. 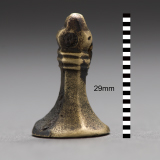 A copper alloy seal matrix with a circular shaped die and a conical shaped handle with the trefoil shaped hoop at the apex. There is a hole in the loop that has been blocked by corrosion. The die is decorated with an armorial device that consists of a shielf with a chevron between three ivy leaves. Foliage decoration sits to the left and to the right of the shield. Running around the outside of the shield is the legend in Lombardic caps, which is bordered by two rows of incised holes. The legend reads: *S IOHIS DE INSVLA.